There are two huge parts we were working on lately that I really wanted to share and talk about. It’s printing industry & characters. Let’s get into those!

(oh and if you didn’t already, you should totally subscribe for beta)

In Sandship, players will be able to do a lot of customization, which will come at a cost of hard labor. You will be able to make your own guild icons, badges and logos, as well as customize your buildings, and even ground tiles inside them. And we’re not just talking color here, but full pixel art control over 15×15 (this number might change yet) canvas, that can be printed on. How does this work? Hold your horses, not so fast. Let’s roll back a couple of industries first.

It all starts with a device called Grower. It can grow some plants, given you have proper DNA info to start with, and water to hydrate it. (And yeah you have to make water from scratch by mixing hydrogen and oxygen first).

The simplest thing that player can grow is Algae. It can be harvested and transported onto belts for the next stage.
This might come as a surprise, but algae is great for making oil. In short, we grow some and put it under enormous pressure in extreme temperatures to turn it into crude oil that we should eventually process into heavy oil. Here is a screenshot in action:

Heavy oil is a great base for making ink! There are 5 main pigments in Sandship: Black, White, Yellow, Red & Blue. While the oil flows through pipes, a special “open pipe” device is used, which is just like a regular pipe, but it’s open to add things in. Adding a pigment to the heavy oil flow will create a brand new ink! Now, five colors may not seem all that much, but the good news is — colors can be mixed! We’ve spent a lot of time implementing complex algorithms for real life pigment mixing simulation in order to make it right, so that you can get same colors you’d be able to mix in real life! Yellow and Blue, for example, will convert into Green, and so on. Players will be able to mix and match and eventually create up to 32 colors (we are thinking of expanding the options, but are more inclined to keep things simple for now). 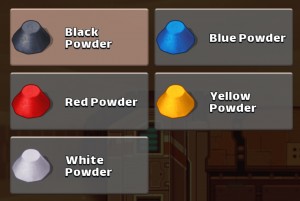 Ink flowing through pipes is great, but it’s useless if it can’t be transported. This is where liquid transportation logistics comes in. It starts early in the glass blowing factory where silicon becomes glass and glass is blown into tubes, spheres and finally bottles. (The game has other containers as well, such as metal tanks, etc). A ready container and pipe full of ink goes into the Applier device that fills the bottles with whatever ink you’ve made; so it can now be stored in the warehouse or be sold to other players! Here’s a glance at the glass blowing by the way:

An Extractor device unpacks the ink in the next factory back to the pipe, and we’re now ready to start printing. Which, need I remind you, was the point of all this madness. Printer device is simple: it can only print one color, and player can draw a pixel art shape of what pixels to draw. Of course we can use multiple printers connected together in order to print layer by layer in different colors, and create some amazing stuff. These things can be later used to customize your factories, or to be sold to other players who are not as good at drawing as you are.

It goes without saying that Oil is not produced solely for printing industry, but this was just one of the applications that we wanted to share!

We are still adding the final touches to this, and it’s probably a good idea for us to share a fianl video once we’re ready. But for now, this blog post and some pics is all you get 😛

With beta closing in, we are working hard on providing the “initial content” of the game, which will be a series of quests to complete. These quests tell the short story of the game, or at least a part of it. Quests are rich in meaningful dialogs and conversations, instead of just being mindless goals to complete. We figured that will make them much more interactive and fun. Conversations with characters are two sided. (As in you have a choice.. well not really :P)

We have an impressive list of potential characters, but we prioritized about 9 of them to start off with. Making characters is a lot of work. When a good write-up of the character and their short story is ready, our art department gets to work right away. They start with color sketches, and if we like them they move to full render. After that, we cut them up into smaller pieces to start rigging for animation, and when animated they move to the last step for VFX, where they get fancy effects makeover.

So yeah… this is what we’re working on. Our priority is to get all of this neat and functional, so that we finally have the beta that we all crave. Everything sort of works — in parts, and we’re trying to bring it all into one big piece.