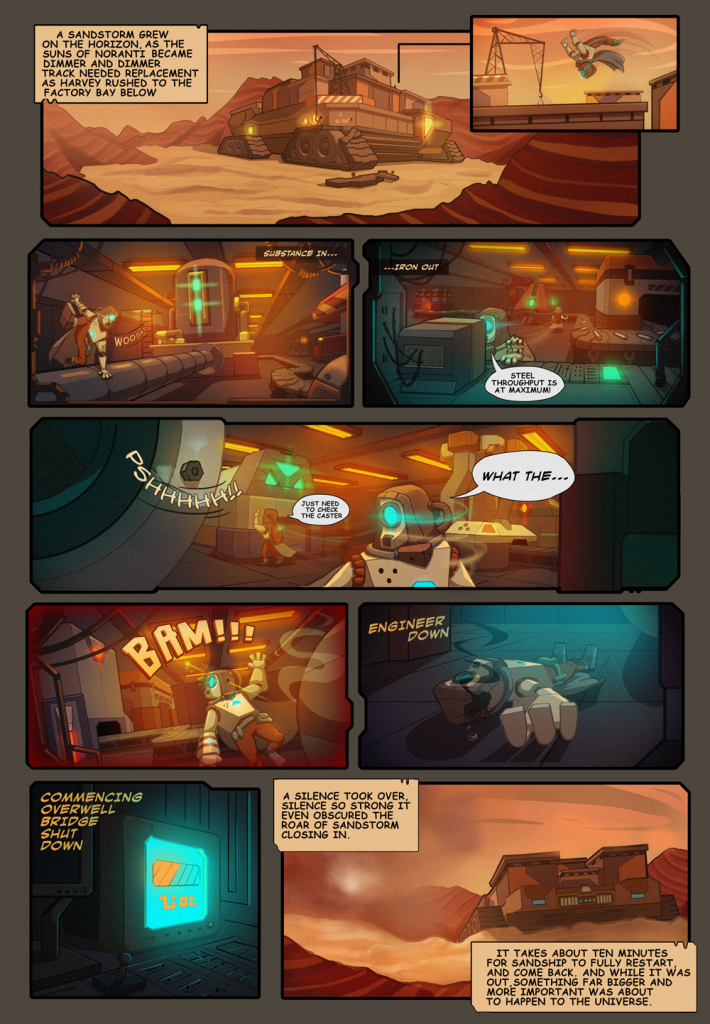 Hi! While we are working hard at finalizing the game and writing a blog post with what’s next and what’s new is coming soon, I thought to share a sneak peek into some part of Sandship lore. I hope we make this more recurring theme and post more stuff like this throughout time.

This one is the day Harvey died.

Harvey was 44th generation engineer on Aya – one of the most powerful sandships in the history of Noranti One. A marvel of engineering and one of its kind – Aya was a fifty feet tall giant desert ship on tracks, spanning 150 feet long and 80 feet wide.
She was at her smallest yet. Sandships – part machine, part organic – tend to grow during their lifespan. After the departure of the 43rd Engineer, Harvey was chosen by Aya in a split second. Never understanding why – he accepted his role, and they became one.
Since then years have passed, and Aya grew to an astonishing size.

A sandstorm grew fast on the horizon, as the suns of Noranti became dimmer and dimmer. The ship was standing still. A track needed replacement on one of its inner plates and Harvey was already making the preparations. A crane carried the gigantic plate out, while the smelting factory worked to produce a new one at an astonishing speed. Substance in, iron out, substance in, iron out. It was hot all around, and a perfectly planned orchestra of devices was hammering plates with a distinctive *humm*. The time was of the essence because the echo of the Overwell was getting stronger with each hour, slowly tearing the space-time around Aya. After all, that’s why, Sandships always needed to move.
Just a few years in service, Harvey was still somewhat inexperienced, but already good at his job. Jumping through the belts system, he was quickly configuring the devices to increase production. One by one, new factories were reconfigured to join in. An electric grid rebuilt from scratch to accommodate the new demand. New machines needed to be made, and this required even more oil. Ten compressors were pushing hard on the organic material to convert it while Harvey was adding the eleventh. He felt proud and happy.

Steel Nut marked with #SN48151 was made about half a year ago. It started as pieces of carbon and iron that moved towards each other. Plunged into the hellfire, they bonded together into unbreakable steel; it was heated, pushed and cut. Finally, it was poured into the shaper where it got the shape of a nut, and a marking – #SN48151. Eventually, steel nut #SN48151 was put into a pressurized chamber of a compressor. It was never quenched though, making the steel more brittle as its internal stresses built up. A little scratch became a crack, wearing out more and more. A huge volume of compressed air rushed into the chamber, and the final link holding the nut together gave up. An immense pressure pushed it out at twice the speed of sound – like a bullet. Steel nut #SN48151 swooshed forward for two hundred feet, right through the air, cloth and the skull where Harvey’s brain was located. Interrupting his every thought and removing him out of existence in a split second. His hands lost their grip, dropping everything on the ground as his body followed soon after. Harvey was dead.

A sandship went into an emergency mode.
Losing an Engineer triggers a strong response, as all systems turn off, and stop all activity.
Synthesizers stopped, terminating the norm well bridge milliseconds before Harvey’s body was able to even hit the floor. The consciousness of the sandship went into a full restart – disconnecting it from the Overwell and its omnipresent existence.
Presses stopped, cutters jammed and electrons froze, bringing circuits to a full halt.
Lights turned off… and only then Harvey’s lifeless body finally reached the floor.
All sounds vanished. A silence took over, a silence so strong it even obscured the roar of sandstorm closing in.

It takes about ten minutes for sandship to fully restart and come back. And while it was out, something far bigger and more important was about to happen to the universe.